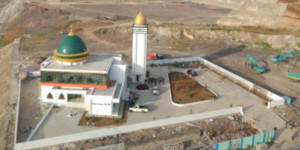 The Java 9 & 10 power plant project in Suralaya is the only newest generation electricity project that successfully entered the funding process after more than two years of processing with PLN so that it complies with Minister of Energy and Mineral Resources Regulation No. 10 of 2017.

y made from OECD countries with various advantages, such as: efficient and reliable coal consumption and more environmentally friendly according to international standards and OECD guideline (with dust catching equipment, sulfur, and others).

In its development, The Java 9 & 10, which managed by PT Indo Raya Tenaga, is

a collaborative project between a state-owned subsidiary and a national private company that promotes the principles of integrity, measurable investment, professionalism, and care for social and community aspects.

PT Indo Raya Tenaga congratulates the opening of the Raudhatul Jannah Mosque at the end of 2018.